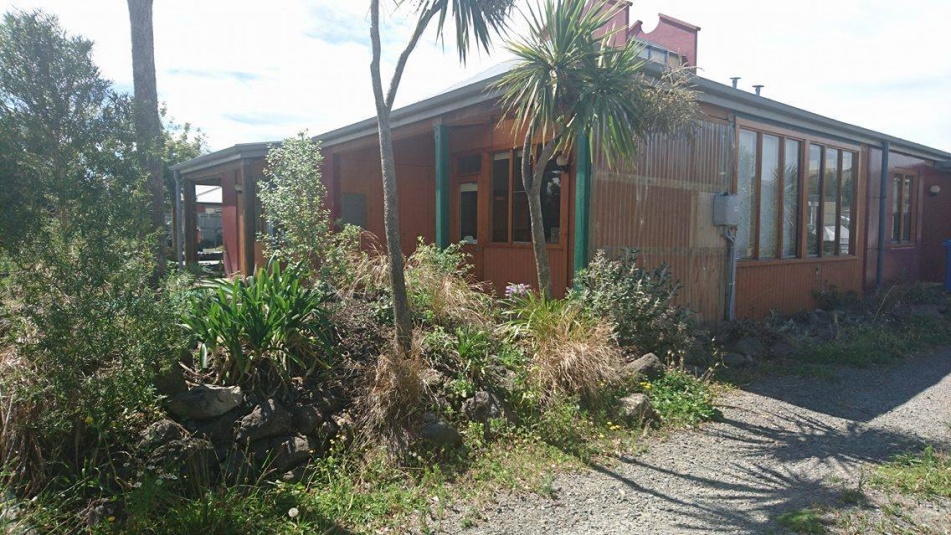 2016 building before the extension of the front half of the Main Building. 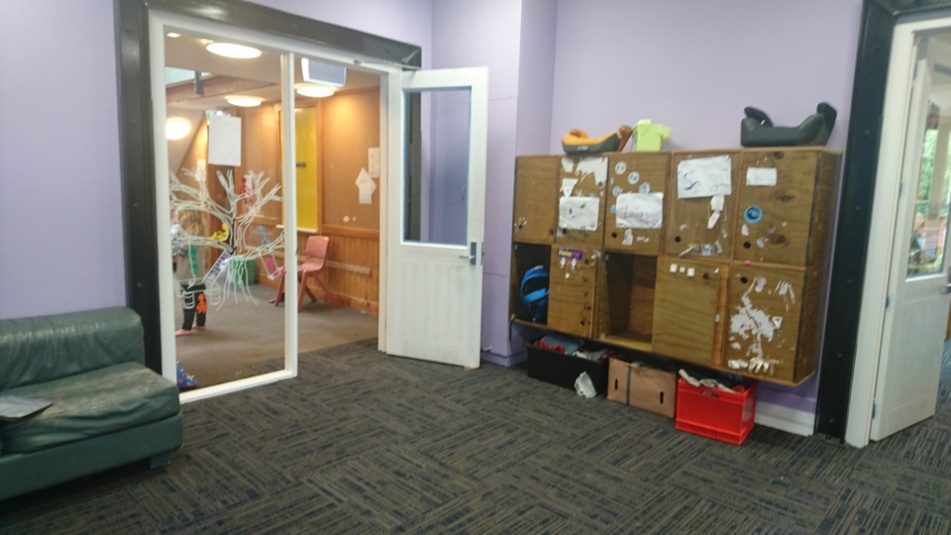 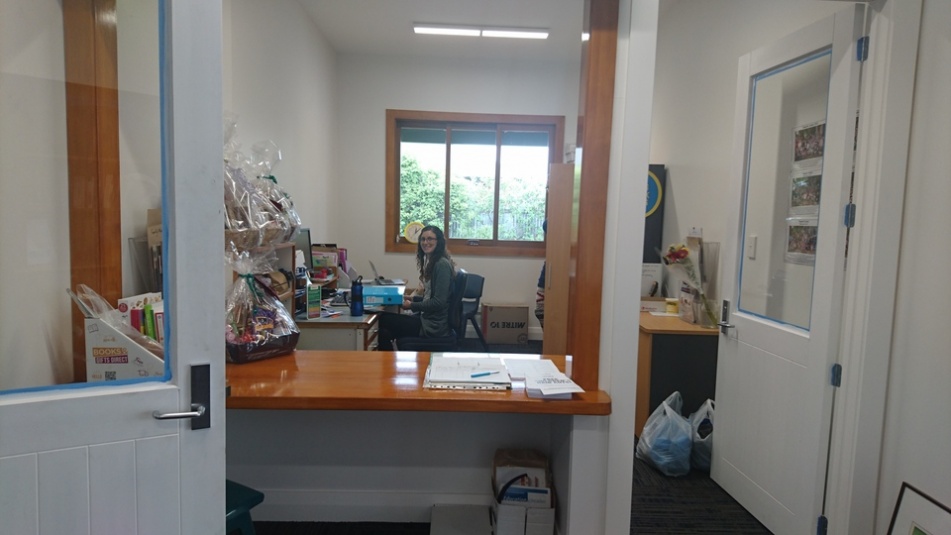 Our wonderful Admin person, Haley, in her new office. 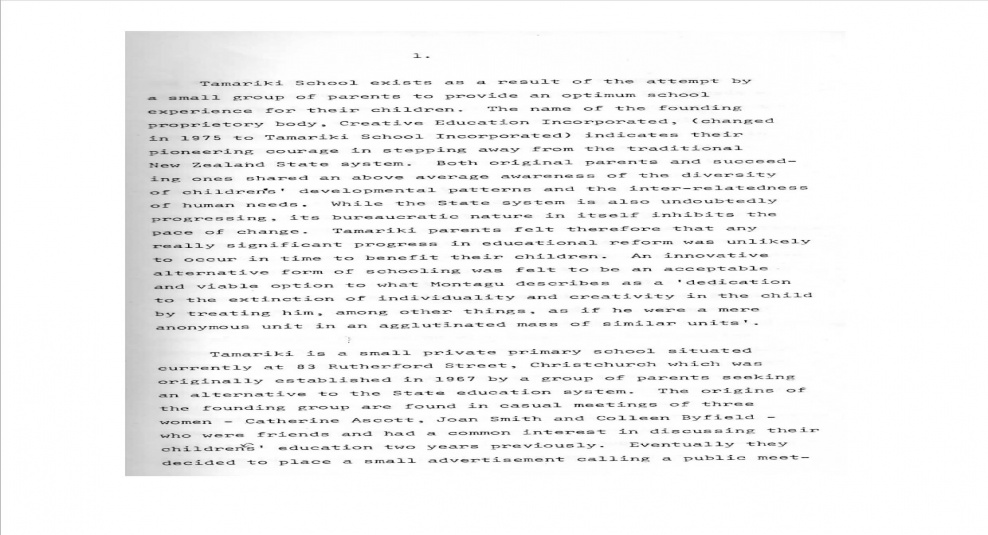 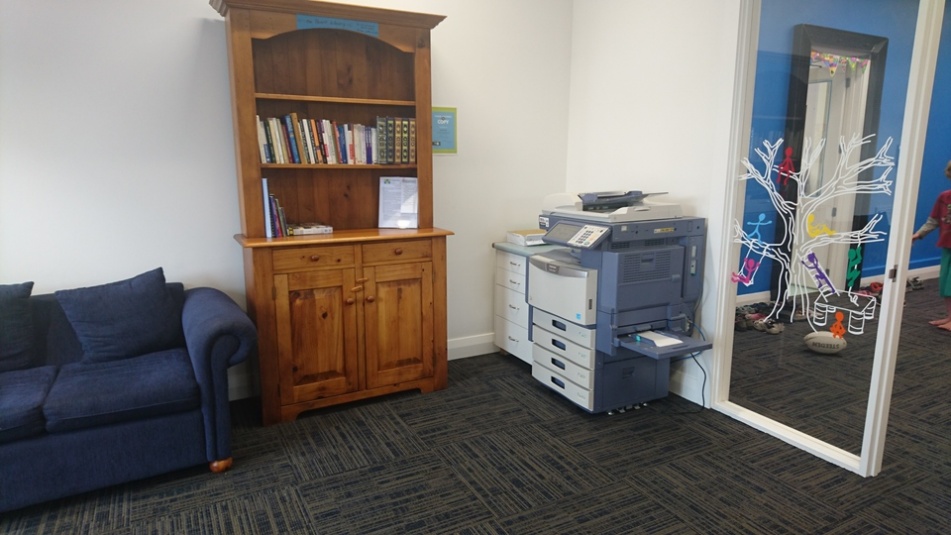 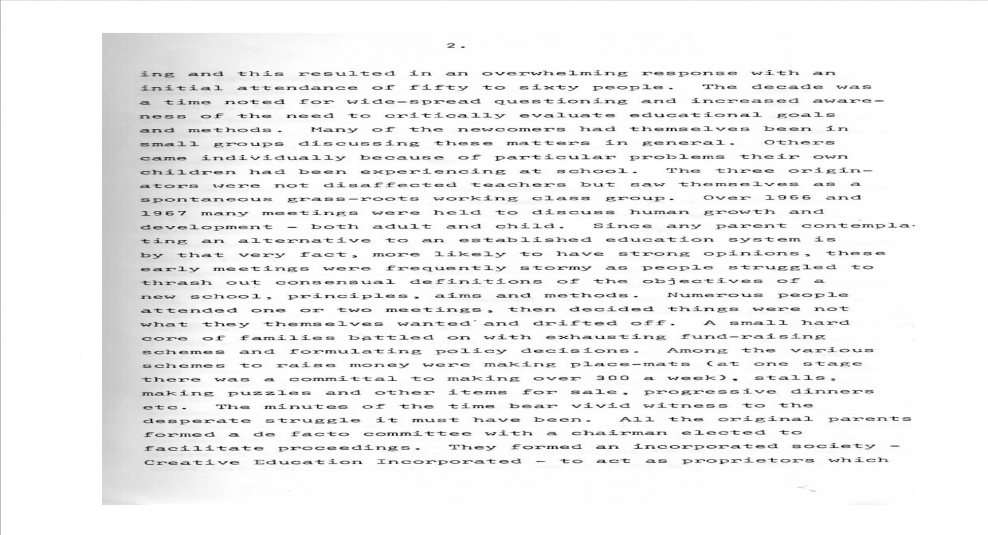 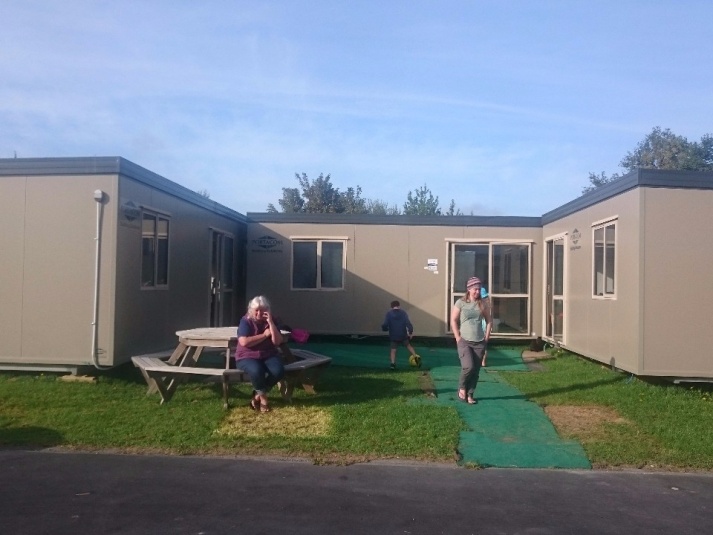 The portacoms out on the field - while the building work was happening. 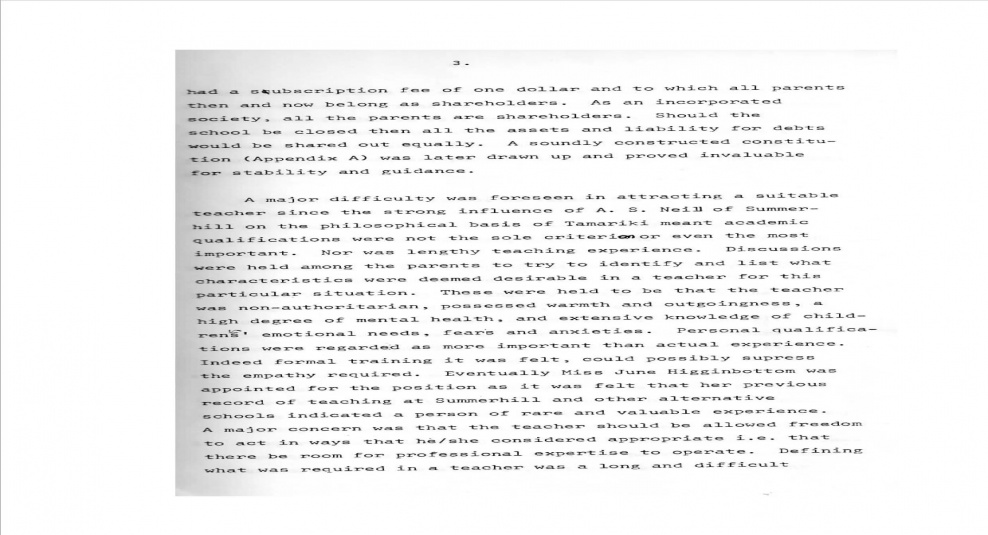 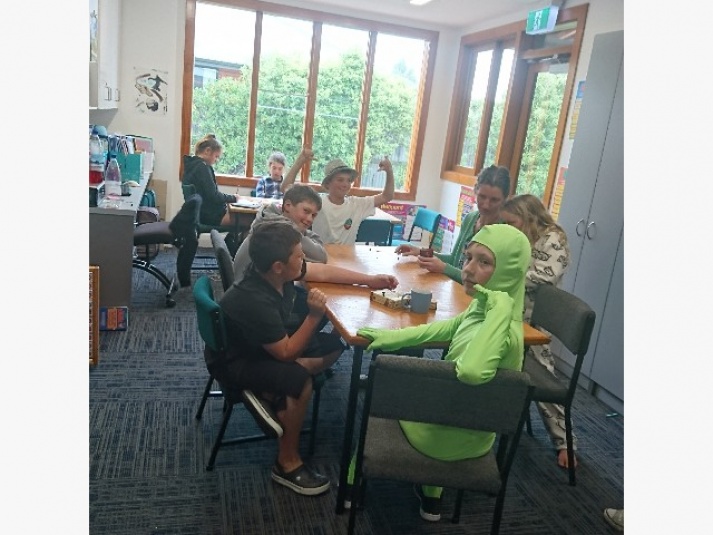 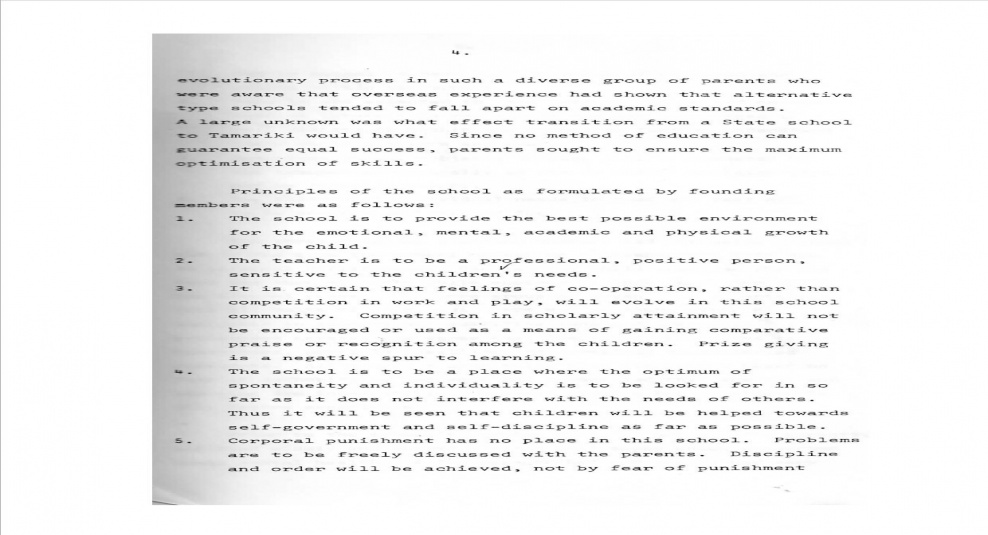 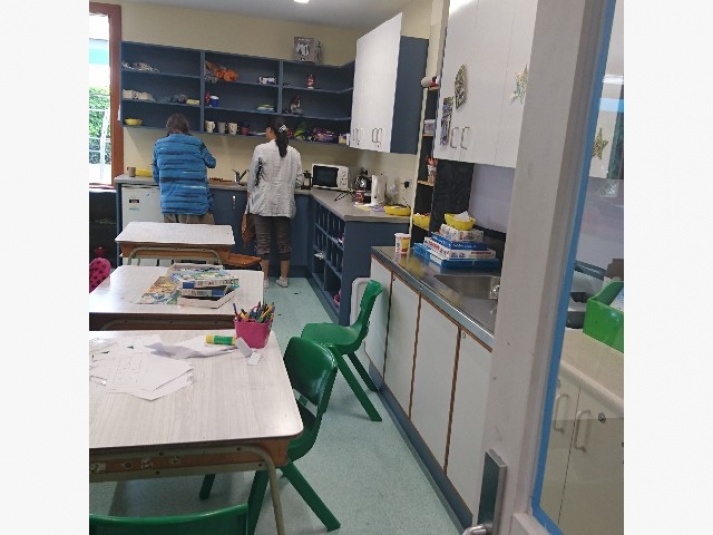 Part of the Sun Room - it has its own kitchen and toilet, to cater for the younger students. 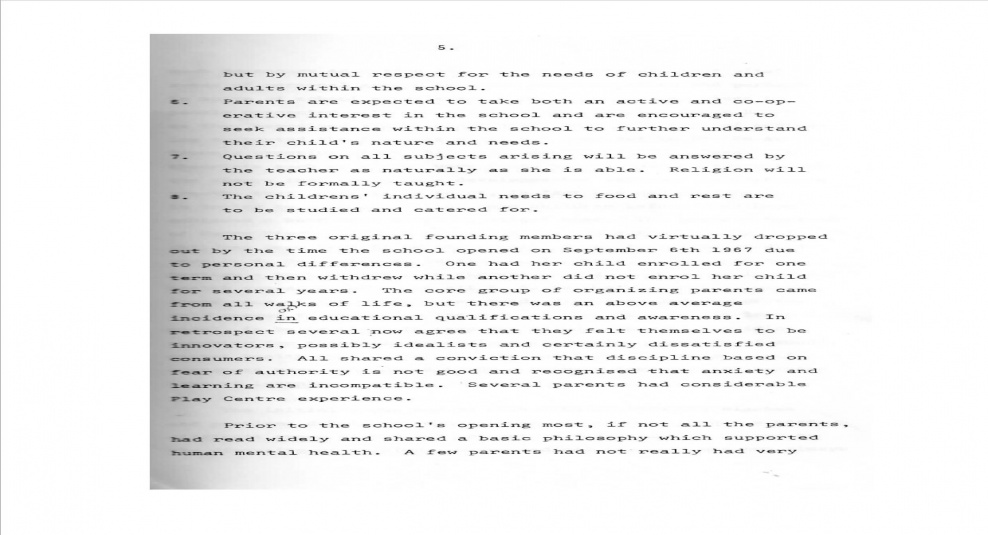 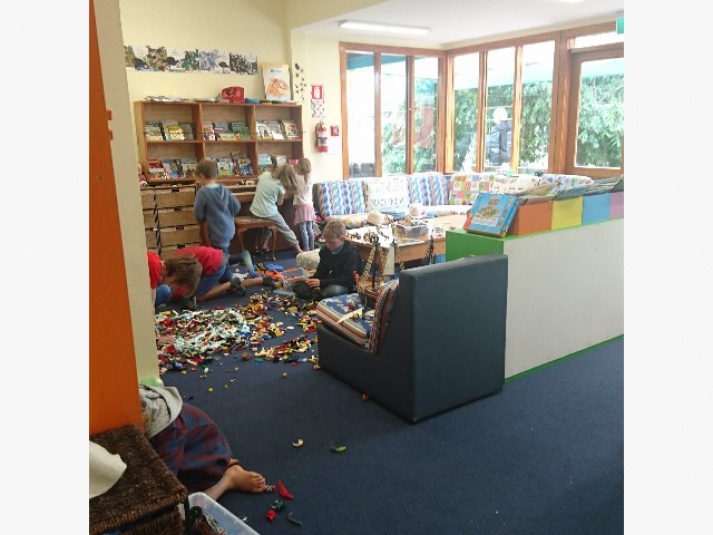 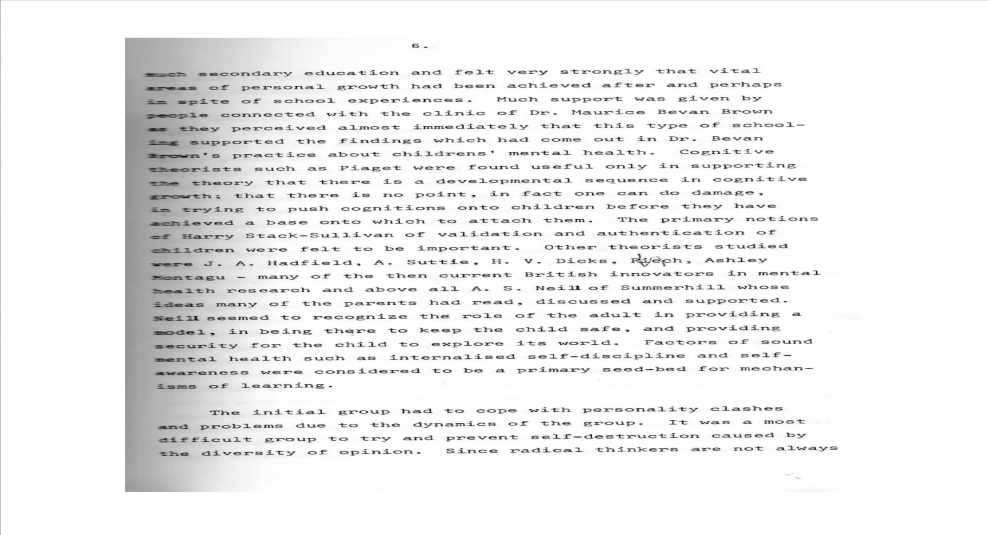 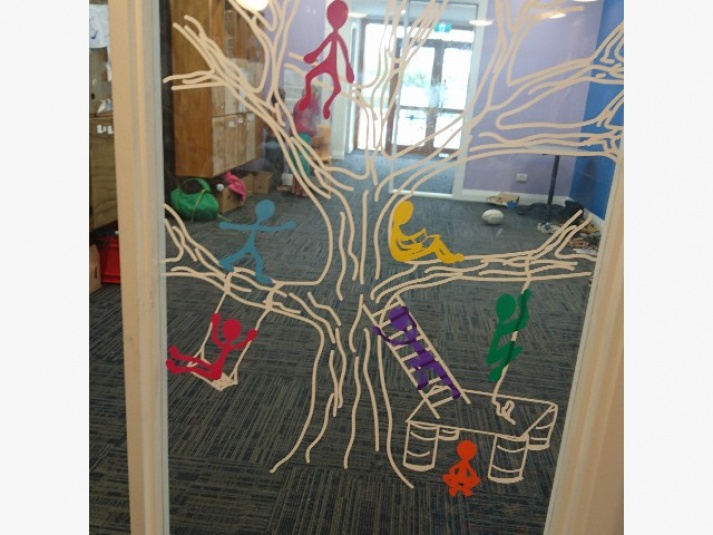 Our Tree decal - this came about from a drawing by one of the students. It has been used for our tee shirts and hoodies. 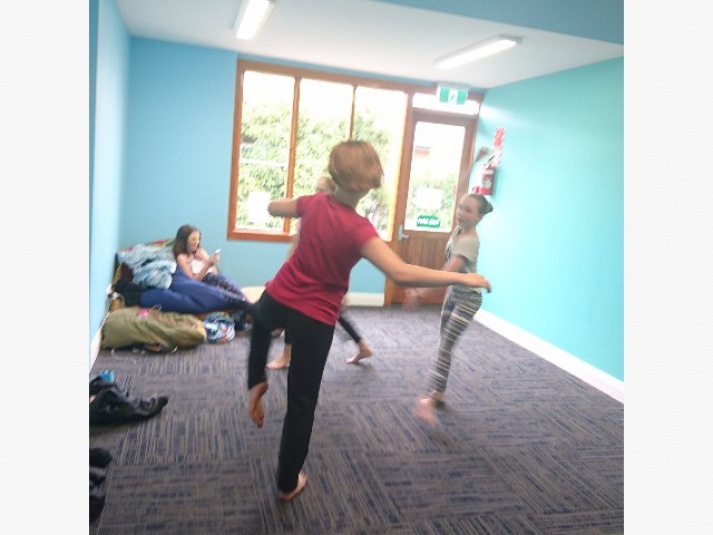 History of the school

Tamariki School was founded in 1967 by a group of Playcentre parents and people interested in positive mental health. The founders were influenced by the Playcentre philosophy that children learn best through play and in a caring environment, and also by the teachings of Dr. M. Bevan-Brown, a local psychiatrist and author of 'The Sources of Love and Fear'. The school was loosely modelled on Summerhill School in England, a ‘free school’ that was founded and run by educator and author A. S. Neill.

Originally a private primary school operating in a tiny brass band hall in Linwood, Tamariki moved to an old villa in Rutherford Street in 1969. We became an integrated primary school in 1990 and moved to our current site in 1994.

We proudly use the Maori name that has been gifted to us, as we truly are a child-focused school and we welcome children of all cultural backgrounds.

Tamariki is the oldest ‘free school’ in New Zealand and one of the oldest in the world. A founding teacher, June Bent, had worked at Summerhill in the 1950s, and which inspired many of the teachers and parents among the founders. There was and is a very strong emphasis on emotional and social wellbeing and supporting each child’s own developmental pattern. Though the parents and teachers in the founding group were very aware of what they did not like or want for their children in the current public school system, they tried not to define themselves in terms of what they didn't want, or indeed to regard themselves as primarily a school, trying to pass on only the academic part of the culture. They rejected the hidden curriculum of unquestioning obedience in the mainstream school system.

Tamariki opened with ten pupils in September 1967, and doubled its numbers at the beginning of 1968. Numbers grew steadily until they reached the roll ceiling of 60 and another school, Springhill, opened in 1996 to take the children Tamariki couldnot fit.

At first in a tiny brass band hall in Linwood, it shifted at the beginning of 1969 to an old boarding house on half an acre in Woolston. This place was regarded as Paradise by the children, but was difficult work environment for the adults, especially as the numbers rose to the high forties.

Originally a private school, owned and operated by the parents, Tamariki integrated into the state system as a Special Character school in 1990. The school complied with the National Curriculum within the National Education Guidelines and was, and still is, is audited regularly by the Education Review Office. Our Special Character sometimes makes this a difficult task for them, but we continute to meet criteria.

In 1994 the school shifted to the present site, to a building and grounds which reflected the children's and staff's ideas of a good place to grow and learn. The roll promptly climbed to 60 again. The teachers found it not quite as paradisal as the old boarding house in some significant ways, though much easier for staff and cleaners. (People here are very messy.) Children have tended to divide themselves up into class levels and to get territorial in ways that they never used to. One factor is certainly school design, another may well be that about 95% of the children had never attended another school, and wanted to be at something others would recognise as a school. For 25 years children with previous school experience made up about 60-70% of our numbers and they were very sure that the less Tamariki resembled an ordinary school the better.

The School celebrated its 40th anniversary!

In December 2016 we completed the extension to the main school building, and also finished our repairs from the 2010 earthquakes. These extensions have made the Sun Room (the room for the youngest students) much larger, and also created new rooms for the students to utilize. The new kitchen has a designated baking area, and the old kitchen is now the staff room. The principal has her own office, separate from the staff room (these used to be a combined space) and the admin area is larger and more functional. During the year of repairs and extensions the sun room, the quiet room and the staff room were housed out in containers out on the field.

The school will celebrate its 50th anniversary October 13th-14 2017. We would love to have ex pupils and families come along and celebrate our journey so far.